The technique of observation relies upon fast photometry and accurate absolute timing of the observations (by appropriate GPS receivers hardware-coupled to CCD shutters). The occultation by a typical Main Belt asteroid moving at 15 km/s, observed at a frame rate of 20 frames/sec, provides an uncertainty around 0.2-0.7 km (depending upon the SNR), representing 1-2% of the size of a 30 km body. An absolute timing accuracy at the 0.01 s level is targeted. The availability of the Tycho and Hipparcos catalogues resulted in a 10-fold increase in the annual rate of observed occultations over the period 1997- 2003. Today, predictions for asteroids are based on Tycho, Hipparcos and UCAC catalogues, for a total of about 4 × 106 stars at V<12. A typical site on Earth has ∼50 opportunities of observation per year, currently. Only a fraction of them will produce positive events. The best-case accuracy of prediction of the occultation path on the Earth surface for Main Belt asteroids with excellent orbits is 50-100 km. As a result occultations by smaller asteroids have a low probability of success. In the case of the slowly moving TNOs, much fainter stars must be considered (down to V~16-18) to find few observable events. The typical uncertainty of their occultation paths exceeds the Earth radius. Only targeted astrometry campaigns (mainly coordinated by J.L. Ortiz, CSIC Granada, Spain, and B. Sicardy, LESIA, Obs. de Paris) have allowed to collapse the uncertainty to a 1000-2000 km, and to detect a few, precious events. We are however at the eve of a revolution in the stellar occultation domain, as the future availability of stellar and asteroid astrometry by Gaia is expected to reduce the prediction uncertainty of >2 orders of magnitude, for all objects (Tanga and Delbo 2007). This will completely change the approach to - and the exploitation of occultation event. While today the observations mainly rely upon small movable telescope ready to chase the asteroid shadow (Fig. 1), in a few years from now fixed sites will have several tens of events to manage each night (Tab. 1). The need to have >2-3 chords for an unambiguous size determination suggests that a network of 4-6 small (0.5-1 m) automated telescopes over a few km will be able to complete the size census of the asteroid belt in the 10-50 km range in a few years. The improved stellar astrometry will also impact the orbit determination for TNOs, resulting in a similar enhancement of predictability. Stellar occultations and asteroid observations at OCA We have established a small team interested in stellar occultations by asteroids and TNOs at OCA and now inserted in the international collaborations in the field. Among our results in the field we recall that we were able to unambiguously determine the shape of the candidate binary (234) Barbara, to observe the first occultation by a TNO from Europe (50000 Quaoar, on February 17th, 2012, P. Tanga) and to obtain the first size measurement of a satellite of an asteroid (Romulus, satellite of 87 Sylvia, on January 6th 2013, from two sites including C2PU). Our observation at C2PU of the occultation of a star by the multiple asteroid 87 Sylvia (Fig.2) is particularly meaningful since although it is positive, it points out the known limitations of the equipment we used (standard CCD video camera with GPS time inserter and external digitizer), resulting in a timing uncertainty of 0.2 s, and a systematic timing discrepancy relative to other observers. C2PU is capable of a much higher time resolution (factor 10X, depending upon star brightness), if the appropriate camera and timing device are used [1]. ﻿﻿ 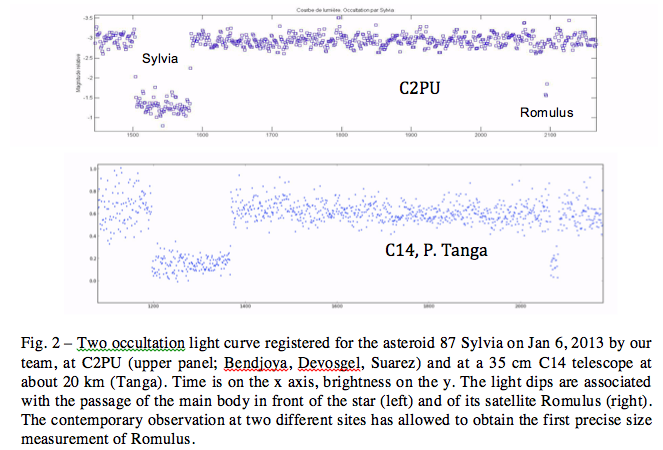 Also, the success on Sylvia demonstrates the interest of having a few (2-3) observing stations spaced in the range 10-100 km for obtaining at least 2 occultation chords of a same object  the only way to provide a first valuable estimate of the object size. Coupling spectroscopy to stellar occultations  an approach revived by Gaia astrometry  can give to Calern an unprecedented power of investigation in the domain of asteroid physical porperties. -- PaoloTanga - 20 Oct 2015
This topic: Main > StellarOccultations
Topic revision: 20 Oct 2015, PaoloTanga